We’ve been working hard this year on a thorough overhaul of the SmartSurvey app and this week we’ve started beta testing on a new version of the export tool which promises to be a huge step forward enabling users to do more with their data.

The export tool is a vital feature for many users, we’ve designed a new tool from the ground up, based on the feedback we’ve received from users and all the ideas we’ve had since launching the previous version. Our goal has been to make it powerful, flexible, and easy to use.

Let’s look at the new tool, and explain how it’s going to make exporting your data easier.

The design has been brought up-to-date in line with the new SmartSurvey “look and feel” that users should be familiar with. 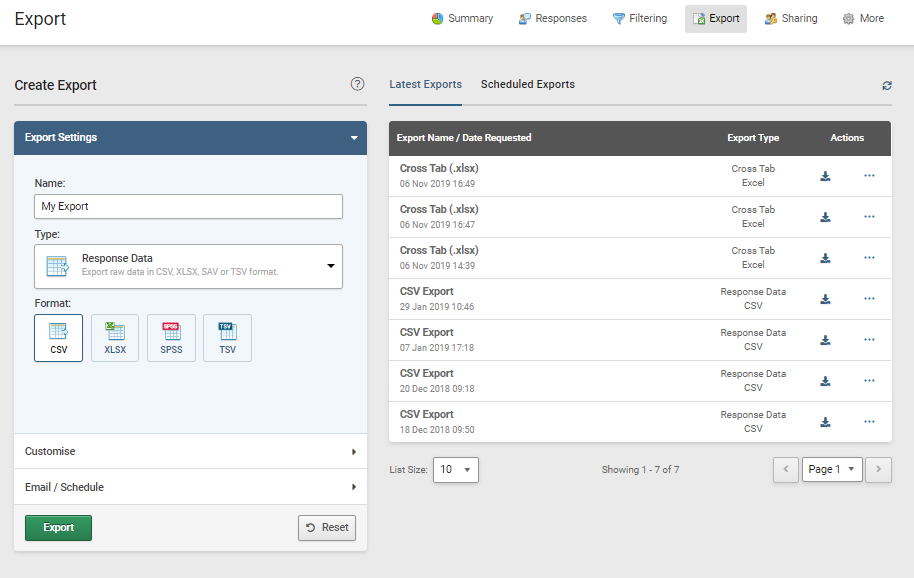 The new layout prioritises the most frequently-used settings and arranges the other options into logical sub-menus. It’s possible to create the most-frequently used type of export in only a couple of clicks. Contextual sub-menus offer deep customisation.

This new feature is something that’s been a regular element of user feedback. It’s now possible to set date range filters that are relative to the date the export is run, such as the last day, week, month, etc. This makes it really easy to set up regular, recurring, exports that will only include the responses received within the most recent date window. A major benefit if this is ongoing surveys can generate weekly reports that are only for that week, instead of all responses received to date making the exported data set far more manageable. 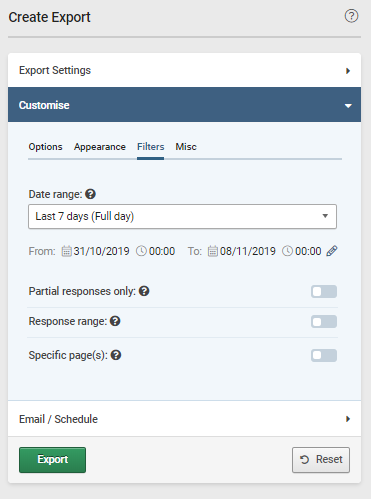 Another frequently-requested feature, you can now create exports that go directly into the right format for direct loading into SPSS.

You can now re-run an export directly from the export list, if there’s a report type you like to use frequently, you can re-run the export at any time you choose. You can also edit it before re-running the export.

If you’ve set up an export that automatically emails the file out, then you can now edit the email that’s sent out via a WYSIWYG editor. 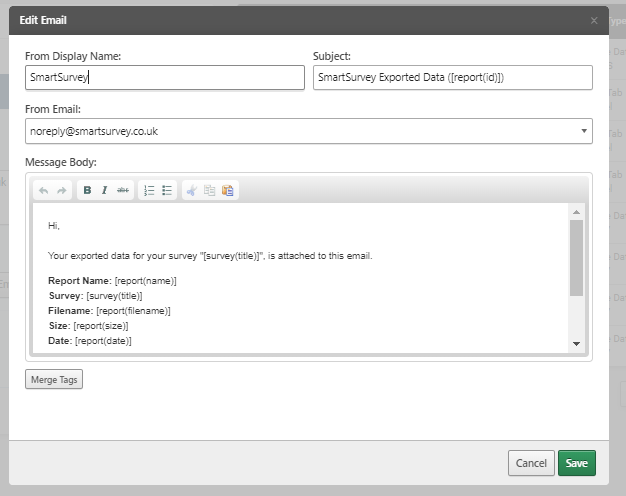 For raw text exports, We’ve added the option to create a tab-separated (TSV) file, in addition to a comma separated (CSV) file.

The new exporter is currently in beta so at the time of this article, it’s only available to enterprise survey software accounts, and only appears for surveys with fewer than fifty thousand responses. But if that describes you and your surveys, then you should be able to access the beta the next time you visit the export tool.

There’s a feedback survey directly accessible from the beta and we’d love to hear from you about your experiences and ideas for the new exporter. We’ve already received valuable feedback from initial users and we’re looking forward to getting more in the coming weeks.

If you come across any issues, or want to use the old exporter, then this is still available at any time, even if you’ve opted to see the new one.

If you want to switch back to the old layout or leave us some feedback, you can find the buttons on the bottom right of the page.

SmartSurvey is a digital survey solution that helps anyone create surveys, build questionnaires and analyse the results.